The 2017 eclipse, in either total or partial phase, can be seen by over 500 million people in North and South America, Europe and Africa. In the US, millions will gather along a tiny ribbon less than 100 miles wide to see totality, the complete blocking out of the sun by the Moon which will reveal the solar corona. The rest of entire country will be able to see a partial eclipse. It is truly a historic event and a wonderful opportunity to view one of nature's most stunning displays.

Looking directly at the sun is bad for your eyes, except during the brief total phase of a solar eclipse. The brightness can leave you with holes in your retina, an afterimage or sight loss. 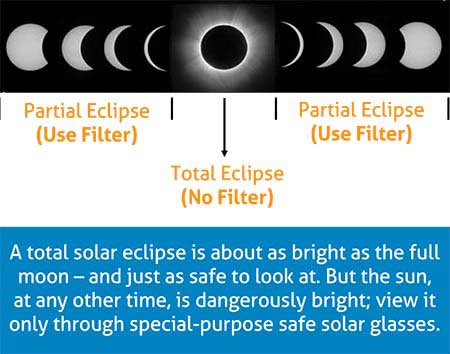 That's why the only safe way to look directly at the uneclipsed or partially eclipsed sun is through special purpose solar filters, such as "eclipse glasses" or hand-held solar viewers. Remember, NASA has advised that the glasses are compliant with the ISO 12312-2 international safety standard.

Here are some other tips:

How to Avoid Heart Disease: 6 Steps to a Healthier Heart

Learn the Basics of SPF & Sunscreen

5 ways to bully-proof your kid

Enjoy Safe Tailgating Without a Penalty Trip to the ER